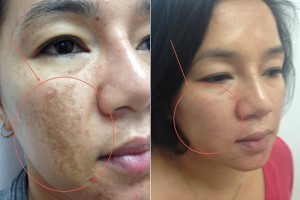 Melasma is one of the most common skin conditions that are also referred to as chloasma. The condition causes the appearance of unsightly brown patches on the cheeks, face, forehead, the bridge of the nose, and on top of the upper lip. Melasma can also affect other parts of the body especially those that are exposed to the sun frequently.

Hormonal imbalance and shifts also tend to go along with frequent sun exposure which increases one’s risk for developing melasma. Melasma, for the record affects men and women, and the most affected group are women in general. Asians and Caucasians are among the most at-risk ethnicities that are affected with melasma.

Is Laser Safe and Effective for Treating Chloasma?

The primary laser treatment for melasma is the nanopulse ND: YAG laser. It targets deep and moderate skin pigmentations, especially melasma. Spectra was established back in 2012 primarily for melasma treatment, and fair enough, it delivered good results in reducing the occurrence of melasma.

If you are undergoing treatment for melasma, it is advised that you wear sunscreen whether or not it’s a sunny or cloudy day outside. Sunscreen helps to retard hyperpigmentation while your therapy is in progress.

Get Your Questions Answered Today