Nose job’ or ‘Rhinoplasty’ is a surgical procedure performed for enhancing the aesthetic quotient of one’s nose. It can also be used for improving the functionality of nose or nostrils in performing their function. The advanced nature of rhinoplasty would be decided by the cause for which it is being performed. A careful access to the bone and cartilage structure of the nose is made. According to the requirement of the results, the bone and cartilaginous structures of the nose are shaped or augmented. The new arrangement of nose structures is more crucial in cases that are being treated for a medical condition instead of a cosmetic reason.

Am I an appropriate candidate for this procedure?

The appropriateness of a patient to undergo this procedure is decided by the physician in the first visit of the patient to his/her office. He would take a medical history of yours and ponder on the effect of various pre-existing medical conditions on your surgery. The usual causes that make a patient an appropriate candidate for this procedure are:

Will I receive a scar on my nose after undergoing the procedure of rhinoplasty?

In the incidence of the formation of a scar tissue, the patient can be sure of it to be an 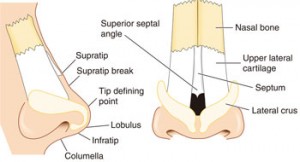 inconspicuous one. Rhinoplasty procedure involves the placement of a tiny incision inside the nose so that the outer, original look of the nose stays retained. The cases wherein trimming of the skin around the nostrils is required, the scars get hidden between the lines that delineate the cheek from nose. So, it would be the nature of the rhinoplasty surgery, which would decide the location of the scar. Nevertheless, the inconspicuous nature of scar is something the patient can be sure of irrespective of its location.

What would be the estimated cost of this procedure?

A regular nose job would cost you around $5,900-$7,500. You can expect an insurance company to cover this cost if the procedure is being carried out for a health-based issue.

What is the usual recovery time after undergoing this procedure?

While most patients revert to their normal lives within a couple of days, extra time may be taken into account in advanced cases. For instance, the cases that were operated upon for correction of a birth defect or trauma induced deformation of nose would require more time for recovery. The surgeons usually place a splint in the operated area for a week’s time that would require you to avoid the use of spectacles. This splint is removed by the doctor after 1 week. You shouldn’t practice yoga or any other strenuous exercise that puts a strain on your nostrils.

What is the normal duration of the nose job procedure?

The surgery would take approx. 1-4 hours for its performance depending on the extent of the surgical procedure.